Lyrics from “Cotidiano no. 2” by Vinícius de Moraes and Toquinho (1972)

Toquinho and Vinicius de Moraes composed this song together on a languid day in Itapuã, Salvador, Bahia. Toquinho was playing around on his guitar as Nilzete, his maid, served up juices and whiskey “with rhythmic gestures.” Nilzete swayed around in a t-shirt with “My love” printed in giant letters. Toquinho relates that he played the first melodic line of the song, singing “My Love na camisa de Nilzeeete” (My love on Nilzete’s t-shirt). He summoned Vinícius to complete the composition with him. Vinícius, suggesting a tribute to his fellow poet and diplomat Pablo Neruda, replaced Toquinho’s “My love na camisa de Nilzeeete” with “Hay dias que no sé lo que me pasa,” believing it was a line from a Neruda poem. That’s how the song, whose title means “Quotidian no. 2,” began; Vinícius went on to “develop other ideas — beautiful, fantastic and terrible — about the quotidian,” recounts Toquinho. 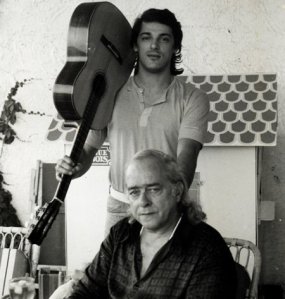 One day in Paris, Toquinho and Vinicius sang “Cotidiano no. 2” for Pablo Neruda, and Vinícius proudly explained the homage. Neruda politely pointed out that the line was actually from a tango, not a poem of his, provoking a rare moment of embarrassment for Vinícius. Toquinho held back his laughter.

The partnership and friendship between Toquinho and Vinícius began in 1970. The year before, when he was in Italy with Chico Buarque, Toquinho played guitar for a few songs on a tribute album for Vinícius, and Vinícius liked what he heard. In early 1970, back in Brazil, Toquinho – just 23 at the time – woke up one early afternoon and his mother told him Vinícius de Moraes had called, and wanted him to call back. Vinícius asked Toquinho to tour with him. A few months later, the two were together on a boat to Argentina (Vinícius, like Tom Jobim, avoided flying). They became close friends and collaborators up until Vinicius’s death ten years later.

King Herod, referred to in the song, is known for having mistreated and killed children. The lyrics in the video above are slightly different (by just a few words) from those in the original recording.

Chico Buarque and Toquinho sing the version banned by censors:

Go on, my brother, catch that plane
You’re right for running away like this
From this cold, but kiss
My Rio de Janeiro
Before some opportunist makes a grab
Beg pardon for the duration of my sojourn
But don’t say anything about seeing me crying
And tell the tough ones that I’m carrying on
Go see how that idle life is going
And if you can, send me back some good news

On December 13, 1968, Brazil’s military government –  in power since 1964 – issued Institutional Act 5 (AI-5), which shut down the National Congress, cut off all channels for criticism of the government and gave unbounded power to the president to rule by decree.  AI-5 ushered in the darkest years of Brazil’s military dictatorship, known as the Anos de Chumbo (Years of Lead), which lasted until the weakened government restored habeas corpus in 1978. The country’s official transition to democracy was in 1985.

Before AI-5 the military already had a close eye on Chico Buarque. Earlier that year he had released his first play, Roda Viva, whose language and content were an affront to military morals. In July, 1968, the paramilitary group Comando de Caça aos Comunistas (Command for Communist Hunting) stormed the set and beat the actors; soon after, the play was banned when a government censor deemed it “subversive” material by a “retarded” author wherein the actors disrespected “everyone and everything – even their own mothers.”

A few days after AI-5 was issued, government agents arrested Chico in his home and brought him to the Ministry of the Armed Forces, where he was detained for interrogation about his play and his participation in the Passeata dos Cem Mil (March of the Hundred Thousand),  the largest and most threatening demonstration against the dictatorship to date.

The following month Chico went into exile in Rome, where he was already known for his 1966 hit “A Banda.” By May of that year he had booked a tour in Italy, and he sent for his friend and musical partner Toquinho to play with him. The pair ended up playing 35 shows together over the next six months.

Near the end of his stay in Italy, Toquinho wrote home about what an incredible friend and partner Chico had been: “I know a lot of great people who want the best for us, but people like Chico – I really think they’re hard to find.”  Toquinho was eager to go home, but sad to leave his friend behind in Italy. In November, 1969, one day before departing for Brazil  (from Rome’s Fiumicino Airport, not Paris’s Orly, of the title), he left the music for this song with Chico as a parting gift. Chico penned the song’s final verse right away, but did not finish the lyrics until after his return to Brazil in March, 1970.

When Toquinho and Chico were reviewing the final version, they were with Vinicius de Moraes, who said they should make the lyrics harsher to reflect the pain of life in exile. Vinicius changed the line “Pede perdão pela duração dessa temporada” (Beg pardon for the duration of my sojourn) to “Pede perdão pela omissão um tanto forçado” (Beg pardon for this negligence, rather forced). Chico and Toquinho accepted the change, but the censors did not, so the samba was released with the original, “blander” lines, as Vinicius called them.

The line about an opportunist making a grab for Rio de Janeiro is likely a reference to the military officers who were awarded top political positions around the country, including in Rio de Janeiro. And “the tough ones” most likely refers to the militants who stayed in Brazil to fight the dictatorship. (Alternatively, this could be interpreted as a message to the military itself. But the phrase in Portuguese – “pros da pesada” – generally reflects a certain respect or reverence, which would not be directed toward the dictatorship.)  Paris’s Orly Airport was chosen for the song because it was much better known to Brazilians in Brazil and in exile than Rome’s Fiumicino Airport.