Ameno Resedá was arguably Rio de Janeiro’s most important rancho – the street Carnaval groups that predominated in Rio in the early twentieth century, before the emergence of samba schools. Ameno Resedá began a tradition of ranchos with especially operatic characteristics — elaborate costumes and characters and the performance of slow, serene marches that told stories; this led the press to call Ameno Resedá a teatro lírico ambulante (something like “street operetta”), which the song makes reference to. Because of the rancho’s innovations, which included the incorporation of an enredo – or theme for the march – and a wind section, Ameno Resedá also earned the designation rancho-escola, which is one of the possible explanations for the origin of the name escola de samba  – samba school. (More on ranchos at the bottom of this post, if you’re interested.) 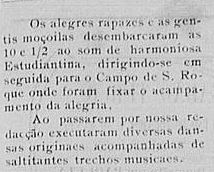 11 July 1909: Note in the Paquetá newsletter “O Paquetaense” -11 July 1909 – announcing a visit for a pic-nic by “Ameno Resedá”
In this song, Aldir Blanc retraces the history of Ameno Resedá, which was indeed founded during a picnic on Paquetá – a bucolic island borough of Rio de Janeiro – on February 17, 1907, with headquarters on Rua do Catete, and which paraded in Carnaval from 1908 til 1941. Blanc tells the story of the rancho through the story of a romance, blurring a love story with the story of his love for Ameno Resedá itself.

Vagalume – which also means “lightning bug,” a creature that makes an appearance in the song – was the nickname of the Carnaval chronicler and founding member of Ameno Resedá, Francisco Guimarães, who created the city’s first news column dedicated exclusively to Carnaval in Jornal do Brasil. (He is no. 13 in the picture above.) Ameno means “pleasant” and resedá refers to the reseda flower; as the group was deciding upon a name, they reportedly considered first the sabugueiro in bloom, but wanted a flower with a more pleasant scent, and arrived at “Ameno Resedá.”

Flor de Abacate (avocado flower) and Papoula de Japão (Japanese poppy) were other important ranchos that followed Ameno Resedá’s model, along with União da Aliança, which is mentioned toward the end of the song. (*The line that follows União da Aliança – “caprichosa, em estrelas desenganos” – might be referring to that rancho or other ranchos; several ranchos had “estrelas” in their name.) The Queen of Sheba was the theme of Flor de Abacate’s carnaval parade – its enredo – in Carnaval 1924.

In this 1955 recording, Donga, Pixinguinha and João da Baiana play Álvaro Sandim’s 1913 polka (adapted to choro) “Flor de Abacate,” a tribute to Sandim’s rancho, another of Rio’s most important and beloved:

Pedra da Moreninha is a rock and look-out point on Paquetá that takes its name from Joaquim Manuel de Macedo’s classic 1844 novel A Moreninha; in the story, the moreninha gazes from a high rock in Paquetá out over the sea, anxiously awaiting the return of her beau, Augusto. As founders of Ameno Resedá recalled, the picnic where the rancho was founded took place under a mango tree right near Pedra da Moreninha.

Joaquim Callado (1848-1880) was a flautist and composer who formed what’s believed to have been Rio de Janeiro’s first choro group, Choro do Callado, in 1870, made up of two guitars, a cavaquinho, and Callado’s flute. The phrase “choro do Callado” could be referring to the group but more likely refers to any choro he composed.

Ernesto Nazareth (1863-1934) was a pianist who earned a living playing scores at music stores in Rio and who, over the course of the twentieth century, earned due recognition as one of Brazil’s greatest composers. Author of some of the most beautiful melodies in the Brazilian canon, Nazareth was affiliated with Ameno Resedá and composed the polka “Ameno Resedá” for the rancho in 1912; the song was recorded in 1914 by Grupo do Louro, and has since become one of Nazareth’s most recorded compositions:

Gilberto d’Avila played pandeiro with Jacob do Bandolim – the Gilberto and Jacob that the song makes reference to.

“Outeiro” literally means small hill, but here is referring to the cathedral of Our Lady of Glory of Outeiro da Glória, which sits atop a small hill overlooking the neighborhood, and gave the neighborhood its name.

Ranchos emerged first in northeastern Brazil, particularly Bahia, inspired in Portuguese Christmas celebrations that culminated on January 6: Three Kings Day of the Catholic church, and in Candomblé, Festival de Oxalá, the day to worship Oxalá, the Candomblé deity syncretized with Jesus.  In groups known as ranchos — which can mean something like religious procession — singers called pastores and pastoras (shepherds) danced door-to-door in flashy clothes with small orchestras, asking for money. They always set out dancing toward a Nativity scene, the object of their worship. Ranchos maintained this largely Afro-Brazilian religious aspect until the founding of Ameno Resedá in 1907.

The Pernambucan Hilário Jovino Ferreira was a pivotal figure in popularizing ranchos for Carnaval in Rio. A son of freed slaves, Hilário made his name as a Carnival booster and rabble-rouser in Bahia. He moved from Salvador, Bahia, to the Saúde neighborhood of Rio de Janeiro in 1872, and quickly became well-known, a regular at the homes of Carnaval fixtures like Tia Ciata, alongside such illustrious figures as Donga, Pixinguinha, and João da Baiana.

When Hilário moved to Rio he joined the already existing rancho Dois de Ouros, on Morró da Conceição. But he ended up arguing with the rancho’s organizers, and on January 6, 1894, founded the rancho Rei dos Ouros.  Rei dos Ouros set itself apart by parading during Carnaval, rather than January 6, and introducing greater female participation and the use of a  porta-estandarte — a woman parading with the rancho’s standard, a tradition that was passed on to samba schools.

Ranchos offered a more elaborate form of revelry for groups that had previously paraded in more tumultuous and clamorous street groups known as cordões, and quickly became the most popular form of Carnaval celebration among Rio’s less privileged classes. They were known as pequenas sociedades (small societies), sharing the Carnaval stage on Avenida Rio Branco in the 1920s and 1930s with the more well-to-do classes’ grandes sociedades: clubs of the white middle class and aristocracy that had emerged in the late 1860s and held European-style processions with floats. The most important of the grandes sociedades were Tenentes do Diabo; os Democráticos (still a popular club in Rio today, and the official “padrinho” [patron] of Ameno Resedá);  and os Fenianos.  Both pequenos and grandes sociedades lasted until the early 1940s, when samba schools overshadowed them for good.

The serene lyricism of ranchos’ music — particularly that of Ameno Resedá and ranchos that followed the rancho-escola’s lead, like Flor de Abacate and Lira de Ouro — led to the development of the marcha-rancho, the most poetic of Carnaval musical genres. Marcha-ranchos are nostalgic and sentimental, with a slower tempo than the marchinhas that were also gaining popularity at the time.  Some examples include “Pastorinhas” (João de Barro & Noel Rosa); “Os rouxinóis” (Lamartine Babo); “Rancho da Praça Onze” (João Roberto Kelly & Francisco Anísio); and “Bandeira branca” (Max Nunes & Laércio Alves).

Trolley tracks being laid on Rua do Catete in 1906. In the photo we see Palácio do Catete and next to it, Escola Rodrigues Alves, which was demolished during metro construction. Photo: Augusto Malta.