—
Sr. repórter já que tá me entrevistando // Mr. Reporter, since you’re interviewing me
Vá anotando pra botar no seu jornal // Take this down to put in your paper
Que meu Nordeste tá mudado // That my Northeast is changed
Publique isso pra ficar documentado // Publish that, for the record

Haha… E ainda diziam que meu Nordeste não ia pra frente // Haha, and they said my Northeast was going nowhere
Falavam até que a Sudene não funcionava // Even said the SUDENE did no good
Mas Dr. João chegou lá // But Dr. João got there
Com fé em Deus e no meu Padim Ciço // With faith in God and my Padim Ciço (Padre Cicero)
E todo mundo passou a acreditar no serviço // And everyone started to believe in the service
Essa é que é a história! // That’s history right there for you! 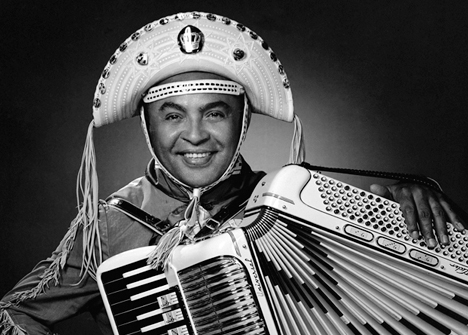 December 13 is an important date in Brazilian history.  Given the current political climate, with the president’s son, a federal deputy from Rio de Janeiro, recently suggesting a renewed AI-5, the date may first bring to mind the dark anniversary of that Institutional Act no. 5, issued on December 13, 1968, which marked the beginning of Brazil’s long “years of lead” — the most repressive of the dictatorship.

But let’s focus on a brighter note: December 13 was also Luiz Gonzaga’s birthday. There’s a lot about Gonzaga already on the blog, so I’m going to keep this post brief. Gonzaga was born December 13, 1912, in Exu, a small town in the arid interior of Pernambuco. He moved to Rio de Janeiro in 1939 and by 1940 was competing on radio talent contests, and his northeastern baião style quickly became wildly popular among southeastern audiences.  As this previous post relates in greater detail, Gonzaga became, in turn, a cultural ambassador for the impoverished and drought-stricken northeast, which by the 1950s had become a top priority for leading economic thinkers in Brazil who sought to remedy the region’s plight as a necessary step toward modernizing Brazil.

As part of that initiative to address what was called the “problem of the northeast,” in 1959, in the wake of a severe drought the previous year, president Juscelino Kubitschek — best known for Brasilia and the slogan “50 years of development in 5” — established the development agency SUDENE (Superintendencia de Desenvolvimento do Nordeste) mentioned in the song. In establishing SUDENE, Kubitschek was following the guidance of his leading economic thinker, Celso Furtado, who became the agency’s first director. Furtado, like Gonzaga, was from the sertão, born in Pombal, Paraíba, in 1920. He was a central figure in defining the regional demarcation of the northeast and in placing the region’s well-being — with a focus on Keynesian-inspired development policies — at the center of mid-century national political and economic debates.

Furtado and SUDENE’s policies were widely criticized as misguided and unrealistic, as the song suggests; and indeed, largely because of the unshakable power of landholding lobbies in the northeast, the agency and the larger Operação Nordeste it was part of never made the difference Furtado sought. Instead, with the military coup of March 31, 1964, Furtado was swiftly removed from office and had his political rights abrogated for ten years. He went into exile in Paris, and the new general-president, Humberto Castelo Branco, appointed “Dr. João” Gonçalves de Souza as director of SUDENE, as outlined in the July 7, 1964, New York Times article included here. Gonzaga’s optimism about Dr. João, the military’s appointee, reveal his unfortunate political persuasions at that time. (I’m not sure how much Gonzaga supported the dictatorship later down the line, especially after Dec. 13, 1968. At any rate, the title of this song, “Nordeste pra frente,” also evokes “Pra frente, Brasil,” a slogan of the dictatorship, popularized through the marchinha for the 1970 World Cup team.)

The song meanwhile offers a humorous take on the arrival of the 1960s zeitgeist to Brazil’s remote northeast: television; long-haired men and rock n’ roll; the expansion of university education; mini-skirts and scotch: symbols of the global 60s’ angsty modernity.  Ah, and oil and cars of course: the Willys Jeep factory in Jaboatão, Pernambuco, mentioned in the song, opened in 1966, and was the northeast’s first car factory.  The TV in Campina Grande refers to TV Borborema, launched in 1966, a year after the Brazilian Air Force opened South America’s first base for rocket launches near Natal, also referenced in the lyrics.

A couple other notes on the translation: Padre Ciçero was a beloved northeastern priest from Crato, Ceará; an annual pilgrimage to his burial place, in Juazeiro do Norte, Ceará, still takes place every year. Lambe lambe refers to traveling street photographers using old-timey cameras.