Quem na estrada do viver // Who on this road of life
Não encontrou alguém // Has never come across someone
Alguém que o fez sofrer // Who made them suffer
A quem se dedicou //Someone they dedicated themselves to
Talvez, quem saber amor… // Who maybe – who knows – they loved
Quem não teve uma paixão // Who’s never had a passion
A mesma ainda tem // That they still hold with them
E vive na ilusão // Living off of the illusion
De ainda de ser feliz // Of one day being happy
Só o destino não quis…// –Just that destiny didn’t will it
Quem não tem no seu passado // Who doesn’t have in their past
As cinzas do seu bem // The ashes of their dear one
No túmulo guardado // Stored away in a tomb
O seu primeiro amor// Their first love
Talvez o derradeiro… // Maybe their last…
Sim… // Yes
Somos todos iguais / We’re all alike
A vida é mesmo assim // And that’s what life is
Desilusões e nada mais. // Disillusions and nothing more 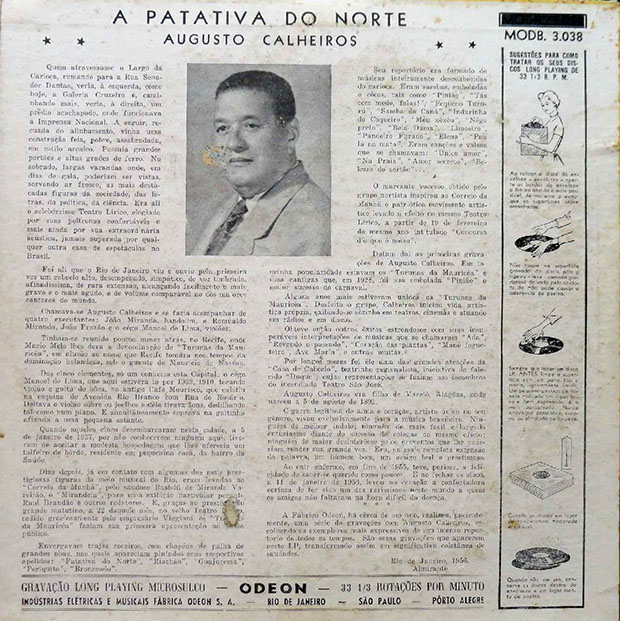 A beautiful version of “Revendo o passado” on trombone (http://y2u.be/xyytMSxPczY) made me want to find out more about the song. It turns out it’s a 1926 waltz by Freire Junior, first recorded by Orquestra da Casa Edison; next came this 1933 recording by one of Brazil’s greatest seresteiros, Augusto Calheiros.

Calheiros was born in Macéio, Alagoas, in northeastern Brazil, in 1891. He moved from Macéio to the larger northeastern city of Recife in 1923, and then to Rio de Janeiro in 1926, where he lived until his death in 1956. He was one of Brazil’s most popular singers during the country’s golden age of radio – the Época de Ouro – in the 1930s and ’40s,.  earning the nickname “Patativa do Norte” after a type of tanager with a delightful song.